I think most of you know from previous posts that I was expecting a baby boy due August 30.  Well, he decided he just couldn't wait around in there and greeted the world 3 weeks and 1 day early, on August 8!  Dominic John Comeau, 6 pounds, 3 ounces, 19.5 inches.

So since he's snoozing in his little bouncy thing at the table with me, and I'm sitting at the computer for the first time in 3 weeks, I feel compelled to share his story with all of you!.

Dennis and I were up early on August 7.  He had a dentist appointment, and I wanted to get some work done before picking up Grammy and heading to UNH to run a few errands.  Something felt a little "off" that morning and I told Dennis that I'll be calling the OB just to double check.  He left, and about 40 minutes later when I stood up to get a cup of coffee my water broke!  I called Dennis (who was just about to go into a dentist appointment - good thing I caught him!) and as he drove home I busied myself gathering the essentials.  I packed our hospital bag (because that was on my "to-do" list for the week... plenty of time!), grabbed our car seat and instruction manual (once again... plenty of time... it was on my to-do list for the week!), and paced anxiously.

The doctor confirmed that yes, my water had indeed broken, and I should head next door to the hospital.  Now.  I wasn't having any contractions.  Only 2 cm dilated.  Most people would have gone home and wait for things to get rolling.  However, I had tested positive for some kind of topical strep infection, so I needed to get started on an antibiotic IV.  So we spent the day at the hospital.  In the deliver room.  Without contractions.  Just waiting for things to get going. 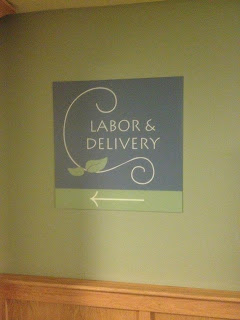 We waited all day.

Finally around 5pm or so we decided it was time to start the ol' petocin.  By 11pm we had regular, strong contractions.  Yay!  Mumma got her epidural.  Yay!  (I know there are many who are all about the natural childbirth.  But I have to tell you.  The epidural was pure magic.  I could feel everything that was going on but didn't have pain.  We were joking with the doctor and nurses between pushes at the end.  So happy I did it!)  Fun fact - the anesthesiologist who administered the epidural looked and sounded like Bill Murray.  And he explained everything he was doing to this needle-phobic gal.  And he was funny.  We loved him!  Oh yeah, he also took the pain away.

Epidural working its magic, the nurses put Dennis and I to bed.  Told us to get some sleep - this baby wasn't going to arrive until morning.  So Dennis napped on a cot.  And I napped in the bed - and was only slightly annoyed by the blood pressure cuff taking my reading every 20 minutes.  My mom and sister-in-law were camped out for the night in the waiting room.  Fun fact - if you visit a hospital cafeteria at 3:00am you'll find an odd assortment of fare.  Eggs.  Bacon.  Toast.  Chicken fingers.  French Fries.  It all depends on what end of your day you're visiting... are you there really early, or up really late?  (This is my sister-in-law's picture... I wasn't in labor taking pics in the cafeteria!) 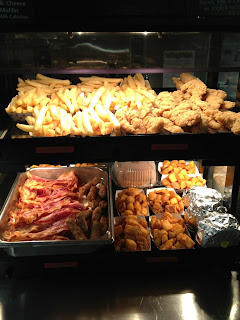 4:00am arrives and the doc proclaims me to be 6cm dilated!  Woo-hoo!  She goes to the OR to deliver twins.  10 minutes later my monitors start doing some funny stuff and the nurses come in and announce that I've moved to 10cm.  In 10 minutes.  We give the doctor a few minutes to finish up with the twins - they prep the room, I assure them I can certainly hold off pushing, Dennis downs two Red Bulls and gets his game face on. 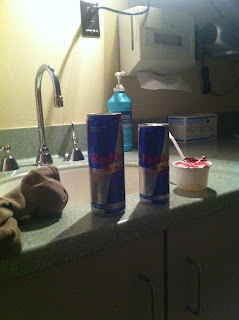 2 hours of pushing that seem to go by in a flash.  Like I said, because of my magic drug we're laughing and making jokes between pushes.  Dennis is absolutely amazing - a rock-solid presence for me.  Encouraging and making me smile.  Who could ask for more?

And the next thing you know, we get this little guy... 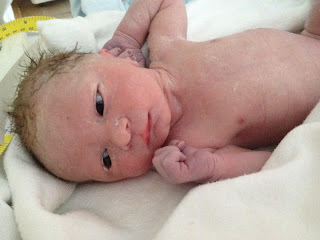 Alert and curious - minutes after his arrival!

He's even cuter after his first bath - he was covered in that cheesy-looking stuff because he was so early.  Here's some more cuteness. 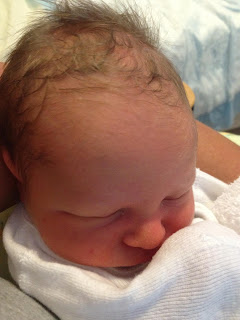 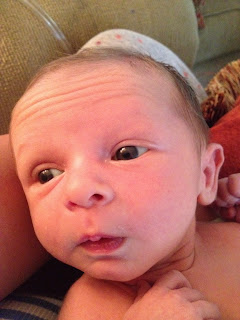 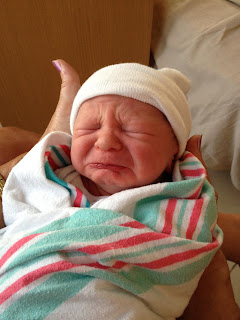 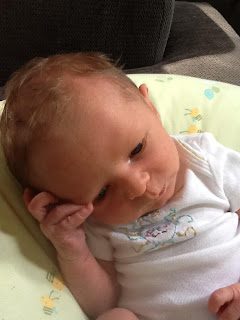 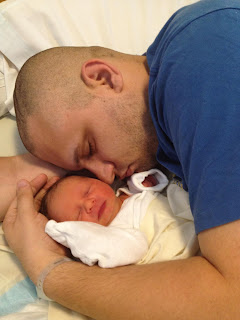 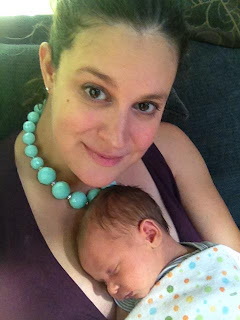 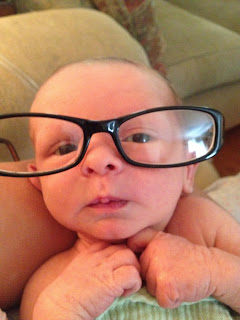 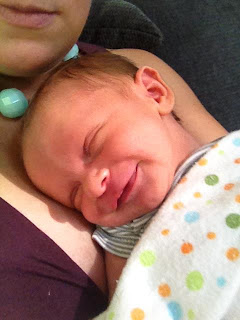 We love him!  He's a good baby.  So far he eats just fine, sleeps fine, and only fusses and cries when something's up like a wet diaper, gas, or hunger.  Otherwise he'll be awake and alert.  Every time he's looking up at me expectantly at 3 am I remind myself that there are people who have a screaming baby instead of one that's just super awake and alert!  We're lucky!

He's a huge adjustment, of course.  Who knew poo could shoot so far across a room?  Who knew that breastfeeding does not really come naturally - it's really hard to figure out?

Here are things we know about Dominic so far.  He hates having his arms confined - swaddle from the armpits down, please!  He likes to take walks and ride in the car - and by "likes" I mean "sleeps".  If you put him in his tub and cover him with a wet, warm cloth diaper he just chillaxes.  He burps like an old man after a few cans of Bud.

90% of the time I feel great.  The other 10% I'm completely overwhelmed.  But I've been told that's how it's supposed to go.  Dennis is fantastic with him.  I'm lucky in two arenas.

So, this has been occupying my days.  And nights.  For the past three weeks.  Although I am finding time to read!  I'm thankful for the Kindle during those late-night feedings.  I'm getting in some Les Miserables time, although I think it goes without saying that my post for July is long overdue and the next one will probably be late too.  I'll get them posted as I get to those parts of the book.

Hope everyone is well.  I'm not going through my google reader as in-depth as usual, but I am keeping up with your posts.  Moms and Dads out there - reassure me that life will never be the same, but will return to some kind of normal.  I won't be a food source every 3 hours forever, right?  :) 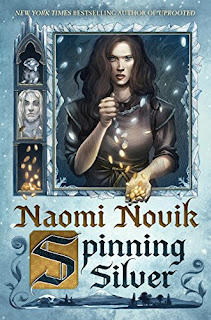 Title: Spinning Silver Author: Naomi Novik Pages: 466 Publisher: Del Rey Genre: Fantasy / Folk Tale Source: Book of the Month Format: Hardcover Summary (back of the book) Miryem is the daughter and granddaughter of moneylenders, but her father's inability to collect his debts has left his family on the edge of poverty - until Miryem takes matters into her own hands. Hardening her heart, the young woman sets out to claim what is owed and soon gains a reputation for being able to turn silver into gold. When an ill-advised boast draws the attention of the king of the Staryk - grim fey creatures who seem more ice than flesh - Miryem's fate, and that of two kingdoms, will be forever altered. Set an impossible challenge by the nameless king, Miryem unwittingly spins a web that draws in a peasant girl, Wanda, and the unhappy daughter of a local lord who plots to wed his child to the dashing young tsar. But Tsar Mirnatius is not what he seems. And the secret he hides th

I love getting email! :) Do you have a book that is destined to be a part of Kate's Library? Please contact me at kateslibrary @ gmail . com with any suggestions, ideas, comments or questions! I look forward to hearing from you! 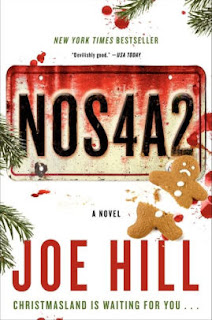 Title: NOS4A2 Author: Joe Hill Length/Pages: 19 hours, 41 minutes / 720 pages Publisher: HarperAudio Genre: Thriller Format: Audiobook Source: Audible Summary Victoria McQueen has an uncanny knack for finding things: a misplaced bracelet, a missing photograph, answers to unanswerable questions. When she rides her bicycle over the rickety old covered bridge in the woods near her house, she always emerges in the places she needs to be. Vic doesn't tell anyone about her unusual ability, because she knows no one will believe her. She has trouble understanding it herself. Charles Talent Manx has a gift of his own. He likes to take children for rides in his 1938 Rolls-Royce Wraith with the vanity plate NOS4A2. In the Wraith, he and his innocent guests can slip out of the everyday world and onto hidden roads that lead to an astonishing playground of amusements he calls Christmasland. Mile by mile, the journey across the highway of Charlie's twisted imagination transforms